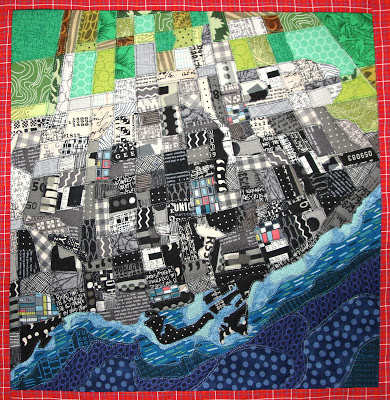 I was so excited when Lisa from Color My World  asked me to join an online art quilt group called "Challenge 4 Art". The remaining two participants of the four are Amy and Claudia. The goal is to make 4 quilts in a year with a specific theme all measuring under 25" square. The first theme was GROWTH.

I decided to make a quilt about the city I live in. In March when I joined this group, Toronto became the 4th largest city in North America after New York, Los Angeles and Mexico City. It is the cultural, entertainment and financial capital of Canada and of particular significance to this household it is also called "Hollywood North". Lately, the most un-Torontonian Mayor of Toronto has been generating negative headlines but he is decidedly not a good representative of this rather sophisticated city. Everywhere you look there are construction cranes and buildings that seem to pop up over night. More than 100 languages other than English are spoken here. All of this diversity makes for interesting dining, exciting festivals and miserable driving. Due to the extraordinary expansion of the city gridlock is now worse here than the famed highways of L.A.

My quilt looks complex but once I figured out my process it was incredibly easy to make. I took a screen capture of the city at Google Earth: 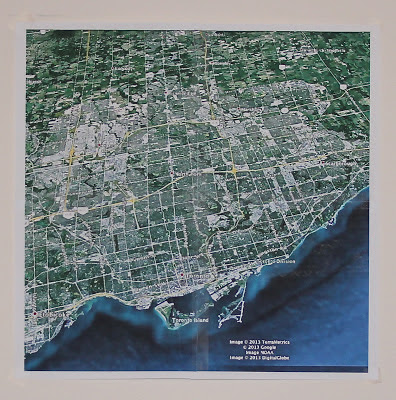 I made a quick sketch of the aerial view and then scanned it to my computer. Using this great App called SplitPrint I printed and tiled my sketch onto EQ Printables to use as a foundation. The measurement of the quilt is 16" x16". 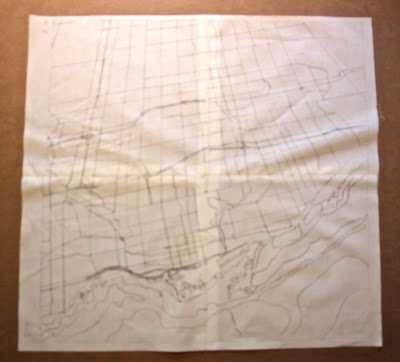 I cut up 3" squares of fabric that I thought looked urban as well as some strips of earth tones for surrounding farmland and blues for the lake. All of the fabrics were ironed to Steam-A-Seam2. 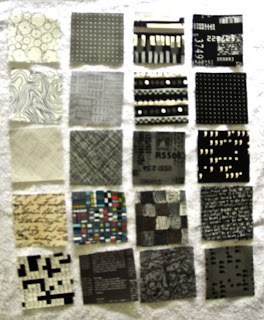 Using the foundation as a guide, when I had spare time, I cut out shapes and then finger pressed them on. It was just like doing a jigsaw puzzle. After a final press, I sewed around all the raw edges with dark thread hoping to evoke roadways.

The piece was started ages ago but unfortunately the binding is not quite finished. While it looks complicated, this technique was fast and easy. It was lots of fun to make and I look forward to sewing the next one. You can see what everyone else created at their blogs below...